CyaninPlus is backed by solid scientific research including:

CyaninPlus was tested in a panel of chemical and biological assays to examine its complex role in helping to reduce the level of free radicals.* The tests showed that CyaninPlus:

Importantly, cellular effects were seen at very low doses of CyaninPlus, which indicates that similar effects could be achieved through reasonable human dosages. 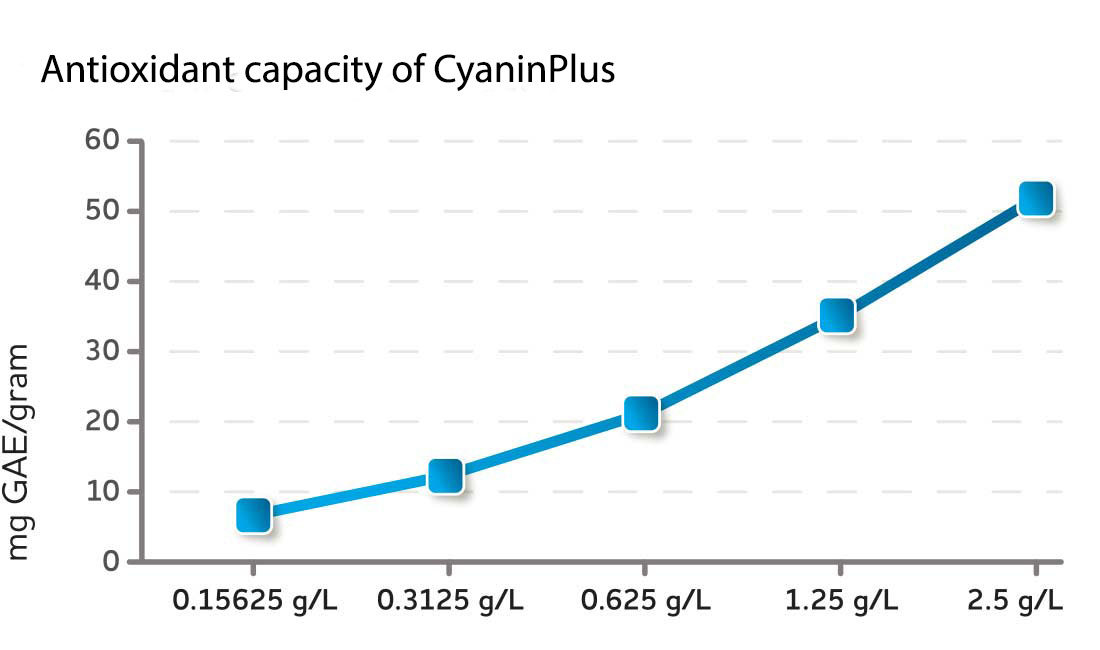 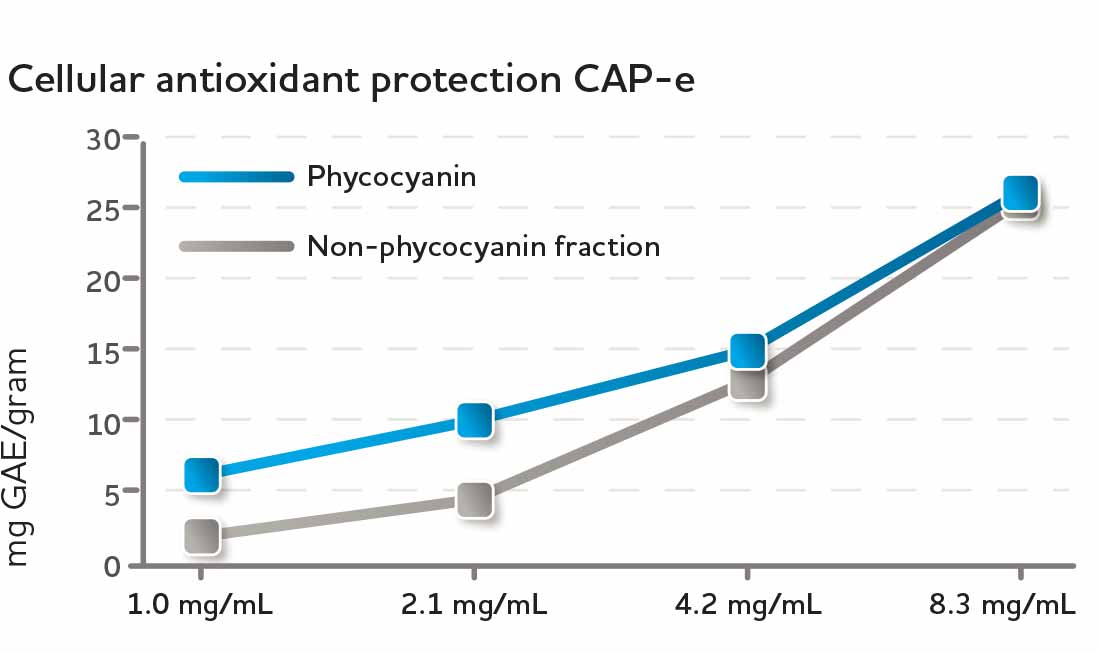 Fig. 2 The cellular antioxidant protection of CyaninPlus was evaluated using the CAP-e bioassay. Both phycocyanin (dark blue) and the non-phycocyanin fraction (gray) contributed robustly to the cellular protection from free radical damage.*

Peripheral blood polymorphonuclear (PMN) cells from healthy donors were used to test CyaninPlus' free radical inhibitory effect in a cellular model. The cells were exposed to an inflammatory insult, which would normally cause the formation of free radicals. However, inflammatory cells pre-treated with CyaninPlus reduced their formation of free radicals compared to control cells. Pre-treating cells with CyaninPlus caused a clear dose-dependent inhibition of the formation of Reactive Oxygen Species (ROS)—the higher the dosage, the greater the protection.* Importantly, treatment with CyaninPlus did not completely shut down free radical production. In addition, the effect was measurable at a dose much lower than that needed to cause an antioxidant effect suggesting that CyaninPlus has additional inflammation modulating roles beyond a direct antioxidant effect.* 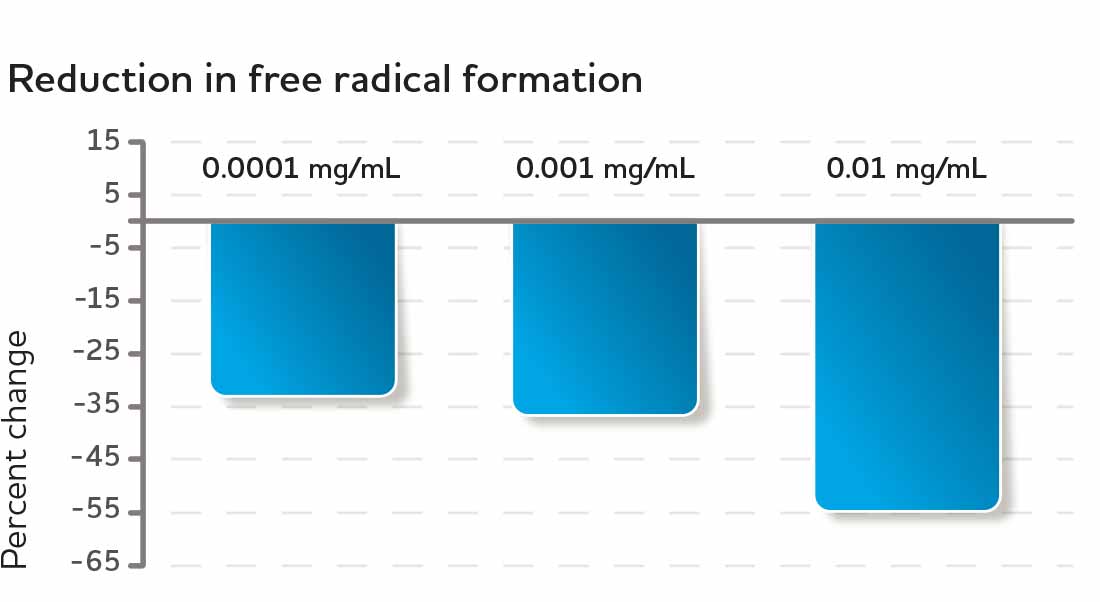 Fig. 3 Cells exposed to CyaninPlus produced fewer free radicals than cells not exposed, which suggests CyaninPlus has a cell regulatory function in addition to its antioxidant function

COX-2 inhibitors have therapeutic applications because they help modulate inflammation. However, the cellular effects of some COX-2 inhibitors also disturb natural processes involved in mucosal tissue integrity and regeneration, as well as immune surveillance. That means they can do more harm than good.

CyaninPlus does effectively inhibit the activity of COX-2 enzymes.* At the same time, though, data has shown it also enhances specific tissue regenerative factors that are suppressed by some COX-2 inhibitors.* A panel of assays was therefore applied to examine the effects of cell exposure to CyaninPlus. The panel demonstrated that CyaninPlus has the following effects on human cells from healthy blood donors:

GM-CSF is a growth factor that promotes the integrity and repair of the epithelial barrier, the layer of cells lining the intestines. Studies indicate that GM-CSF plays an important role in the regulation of intestinal immune and inflammatory responses. When healthy lymphocyte cultures were exposed to CyaninPlus in laboratory cultures, cellular activation resulted in induction of GM-CSF production.* 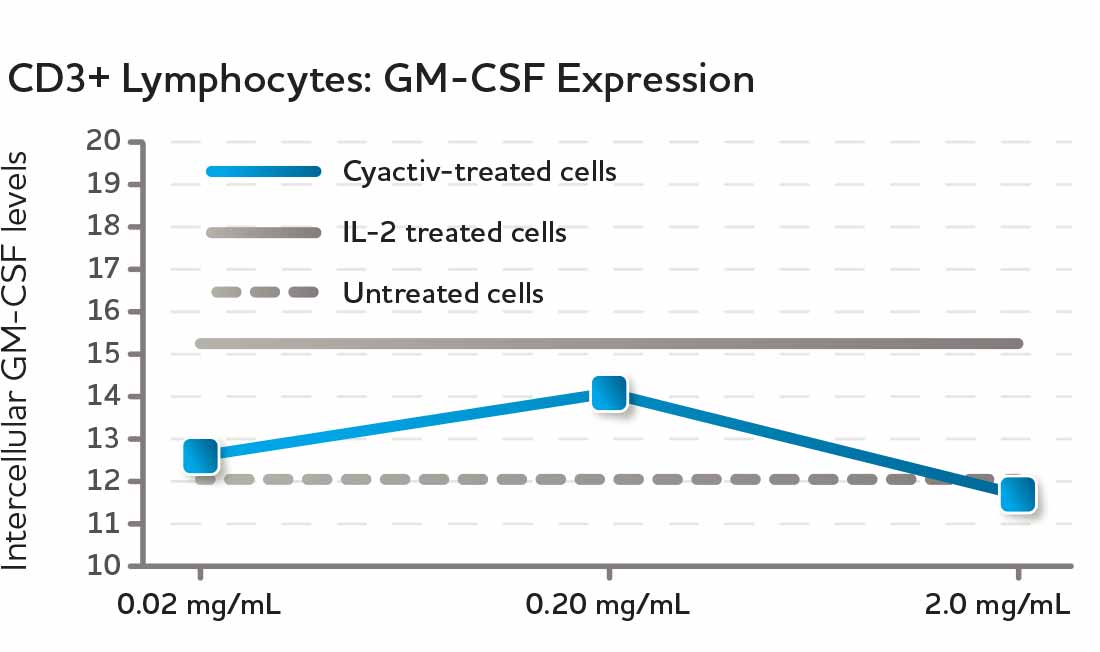 Immune cell migration is a critical part of our immune surveillance program, because it ensures that immune cells are in the right place at the right time to protect us from harm. However, when immune cells migrate to the site of injury, they contribute to an inflammatory process that can cause more harm than good.

Polymorphonuclear (PMN) cells play a role in immune surveillance as well as infiltration into sites of inflammation. In circulating blood, PMN cells account for 70% of white blood cells and are the first line of defense against harm.

CyaninPlus is different. Laboratory research reveals that CyaninPlus supports healthy cellular migration as part of immune surveillance, and selectively and partially inhibits migratory behavior in response to an inflammatory insult.* In a normal culture environment without inflammatory stimuli, CyaninPlus treatment resulted in increased PMN-related immune surveillance activity in immune cells harvested from healthy blood donors. In contrast, in the presence of an inflammatory chemoattractant, CyaninPlus reprogrammed the same cell type to a reduced migratory behavior.* 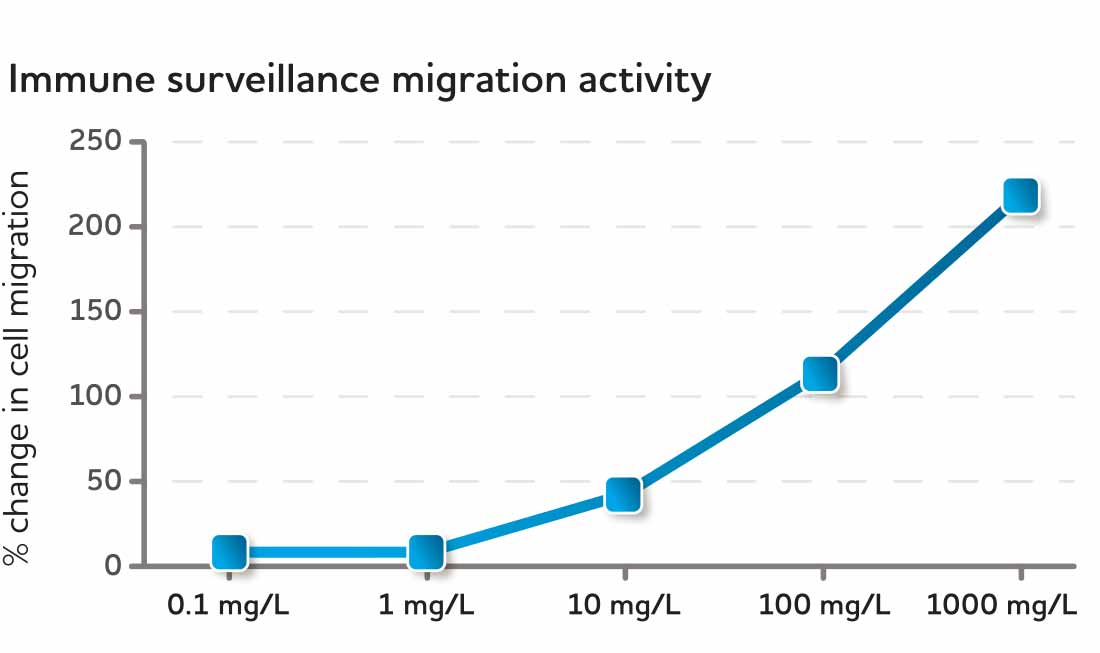 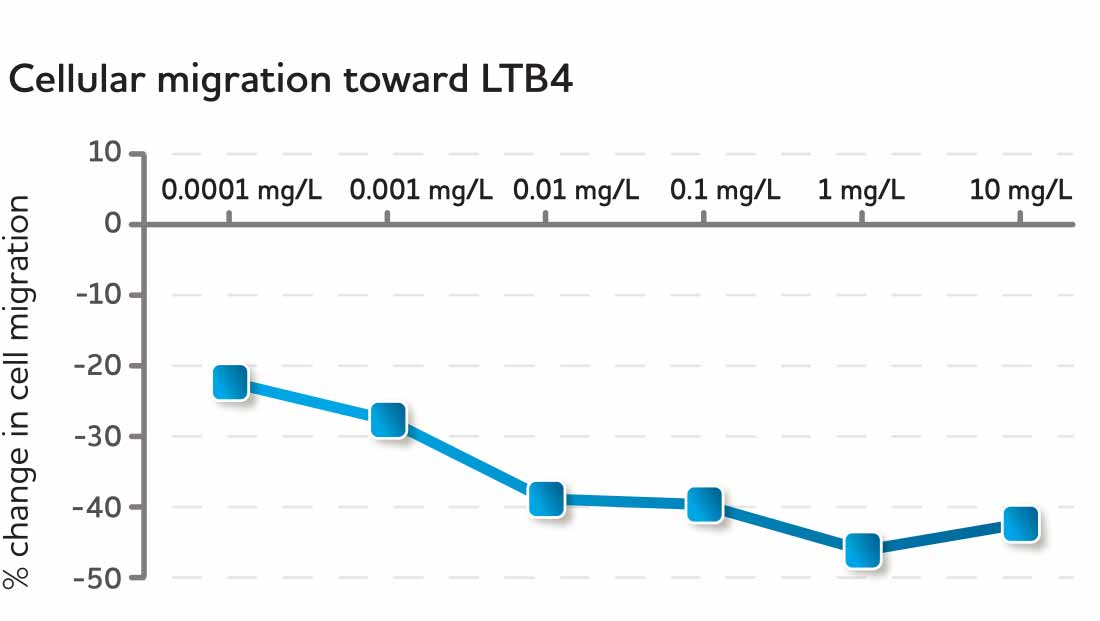 Physical discomfort can inhibit general activity and lead to a more sedentary existence, which has health drawbacks. Three clinical studies have assessed the effect of CyaninPlus on physical discomfort: 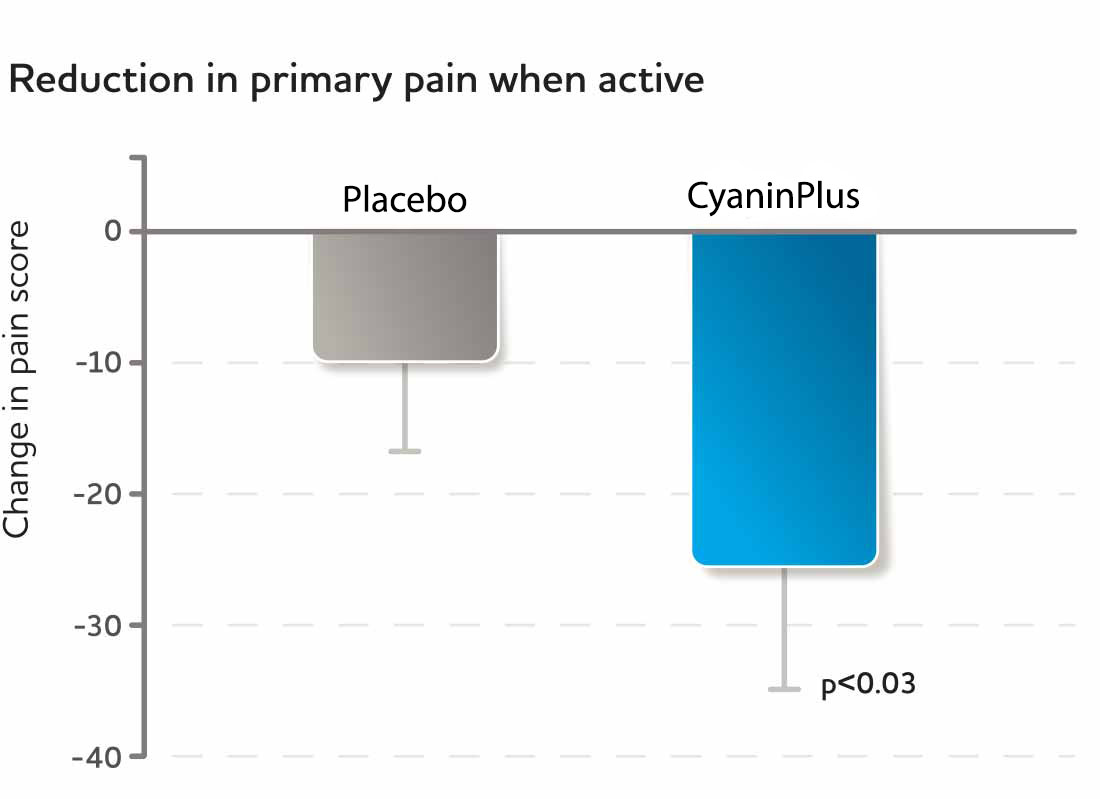 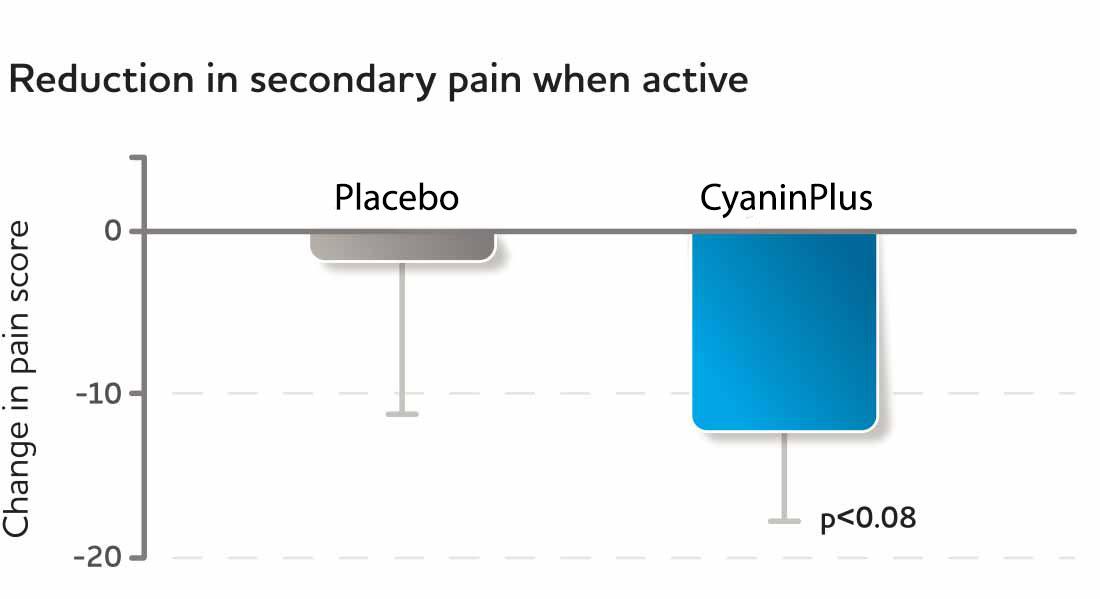 Fig. 7, 8 The two graphs above show the reduction in discomfort scores during physical activity after 2 weeks of consuming either placebo or CyaninPlus (1 gram/day).

Each study participant's anatomical area of primary and secondary discomfort was identified at the study's start and tracked at later visits. Discomfort was scored using visual analogue scales (VAS), where “0” indicated no discomfort and “100” indicated a great deal of discomfort. Subjects' increased feelings of comfort during physical activity was statistically significant for the primary complaints (p<0.03) and reached a statistical trend for secondary complaints (p<0.08).*

CyaninPlus has been tested for different aspects of safety in laboratory tests as well as in clinical trials. The following safety-related information has been confirmed.